Motion: The Quantum Theory of Reincarnation

A short motion piece visualising an otherwise invisible subatomic particle collision – the contact, the annihilation, and the recreation of matter.

The atoms are general stand-ins and nothing specific and designed to be used in conjunction with presentation in an educational setting; providing a more accessible entry point into particle physics and in particular when particles and their antiparticle crash; visualising their destruction, brief new creation and then decay into other new separate independent creations.

In the process of researching particle collisions, I came across Feynman Diagrams, a highly useful pictorial representation of equations that predict the behaviour of subatomic particles. They themselves are equations, and thus there are endless iterations.

Forgetting the multiple utilities of these diagrams and focusing on their ability as an excellent entry point into particle physics, I wondered if I could make it more evocative with motion. Meaning, If I generalised the interaction; just got the basics; it may prove to be another yet more accessible entry point into the world of particle physics. 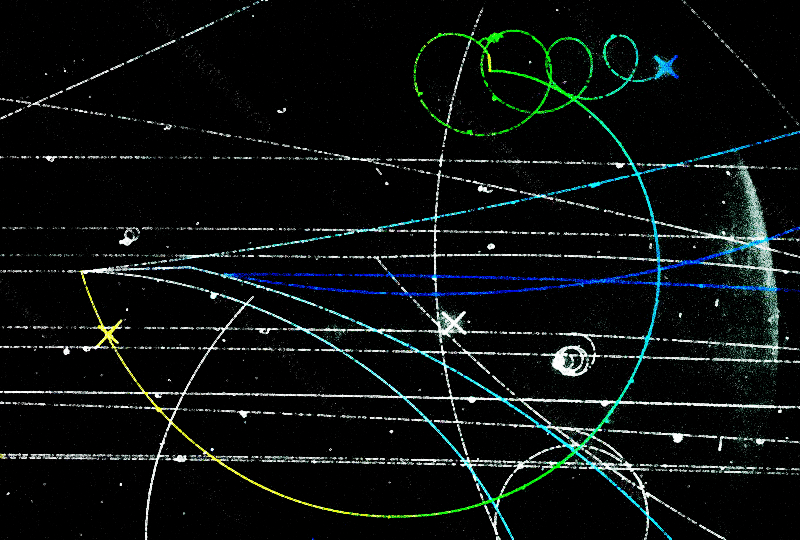 —> One of the kaons has collided (left) with a hydrogen nucleus (proton), producing charged particles, one of which, a positive pion, loops round anticlockwise to the upper right.

—> On this journey, it eventually transmutes into a muon, which travels a short distance before itself decaying into an anti-electron or positron.

—> This spirals a few times conclusively reaching the cross at the upper right.

When a particle collides with its antiparticle, the two disappear in what’s known as annihilation. But briefly, in its place, an entirely new particle is born (or transmuted), out of that it will decay and a new set of distinctly different particles are birthed.

Physicist Kevin Black states this would be the equivalent, of two cars colliding, vanishing on impact, a bicycle appears, and then explodes into kitchen utensils. Driving home the point, the new particles are fundamentally new and different; no information is carried across in the new creations.

The story I wanted to tell was the eternal dance between creation and destruction and thus plotted two tendencies of stability and instability across the duration.

An initial ballet of an orbit (which is not something that is likely to happen in real life, this just proved a better introduction to the idea of two opposites (particle and antiparticle)), then the crushing of the two particles exchanging colour (signifying two opposites meeting) to then disappear into a void of black (absence) where a shining ‘second coming’ briefly appears (creation) to then once again decay, become unstable and burst (transform) into four or five other smaller particles to be washed off beyond the visible canvas; the story thus continuing off-screen.

Taking information and striving to transmit a story verbatim is a little more literal than what I am used to, however, it proved a good project in translating and relaying information from one audience to another. The audience considerations really helped guide the project from conception to finalisation. For example, there was a stage where I was thinking about adding type to aid explanation (it being educational n’ all) but I felt it unnecessary as the visuals would already be aiding existing material/presentation, and believed it should remain solely cinematic without visual distraction. The cinematic element, was simply to make it exciting and evocative, to quiet an audience into contemplation, and although much of it is not factual, the truth is still there. So what is the truth? I titled the piece, Creation, Destruction, Rebirth — The Quantum Theory of Reincarnation. Much in the field of quantum physics is theoretical and a lot of it tallies with religious truths. For instance, multiverse theory has little, if any, supporting evidence it actually exists but remains useful to theoretical physicists because it helps explain and navigate the way everything is – like a religion. Nataraja, or the symbol of the dancing Shiva, is a popular symbol in Shaivism but additionally stands outside The Large Hadron Collider at CERN where all those bods smash particles together for years on end – but why is it there? One of the symbols within the symbol of Nataraja is of the continual cycle of creation and destruction, a ceaseless dance; the dancer is simultaneously creator and creation; dancing through the infinite cycle of birth and death. Aldous Huxley in 1961 lectures, it is “both cosmic, and spiritual, and psychological […], completely compatible of the modern scientific idea; including the world of mass-energy; space and time; and the idea of infinite energy dancing timelessly throughout the universe”.

I suppose, in the end, this is an illustration of the infinity of our universe – the truth that we come from whirling nothing and we return into whirling nothing to be joined once again with stars, moons, rivers, and Tupperware, forever.